The Aftermath of TNC Drama. The Blames and Rumours.

The Aftermath of TNC Drama. The Blames and Rumours.

Chapter 1: All eyes on Cyborgmatt and others.

I’m a little late on this but hey, it’s better late than never, as Valve has finally announced an official statement regarding Kuku’s drama and also dropping the ban hammer on Kuku temporary, Valve also stated that Kuku nor TNC were banned by anyone to attend the Chongqing major.

This has raised a lot of questions in the community as we look at some of the “trusted” sources of information such as Jack “KBBQ” Chen, a prominent influencer in the Chinese community, Cyborgmatt, Godz and even EternalEnvy. As weeks ago, they were the first who twweted about the bans by the local Chinese government. While most of them were using catchphrase “rumour”, Cyborgmatt and KBBQ were the ones who reassured that it’s not a rumour at all.

Now the question is did Kuku actually got banned? Is Valve right or the guys who tweeted about it? So many inconsistencies in the news being spread in social medias still remained. Either way, let’s not raise our pitchforks on these guys as they really are just keeping the community updated. Who knows, maybe they were actually telling truth? 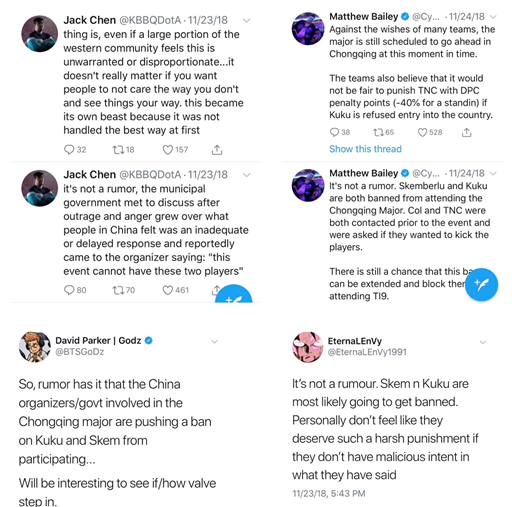 Of course, after yesterday’s announcement, the social medias worldwide be it Twitter, Weibo or even Reddit just bloomed with thousands of discussions about this. Of course, the main character will also have a word about this too.

In his initial tweet, Kuku told the community that they should all respect Valve’s decision and end this drama, claiming that he feels “better” now. However, that quickly turned south and ironic when a replier said that all these drama are coming from Kuku and TNC, questioning why are they acting as the victims.

To which Kuku replied, “Okay I took the blame. Are you happy now?”. As many viewers read this, they knew that Kuku was not sorry at all (I didn’t even thought about it until these guys actually made a Reddit post about it, I’m just that ignorant) 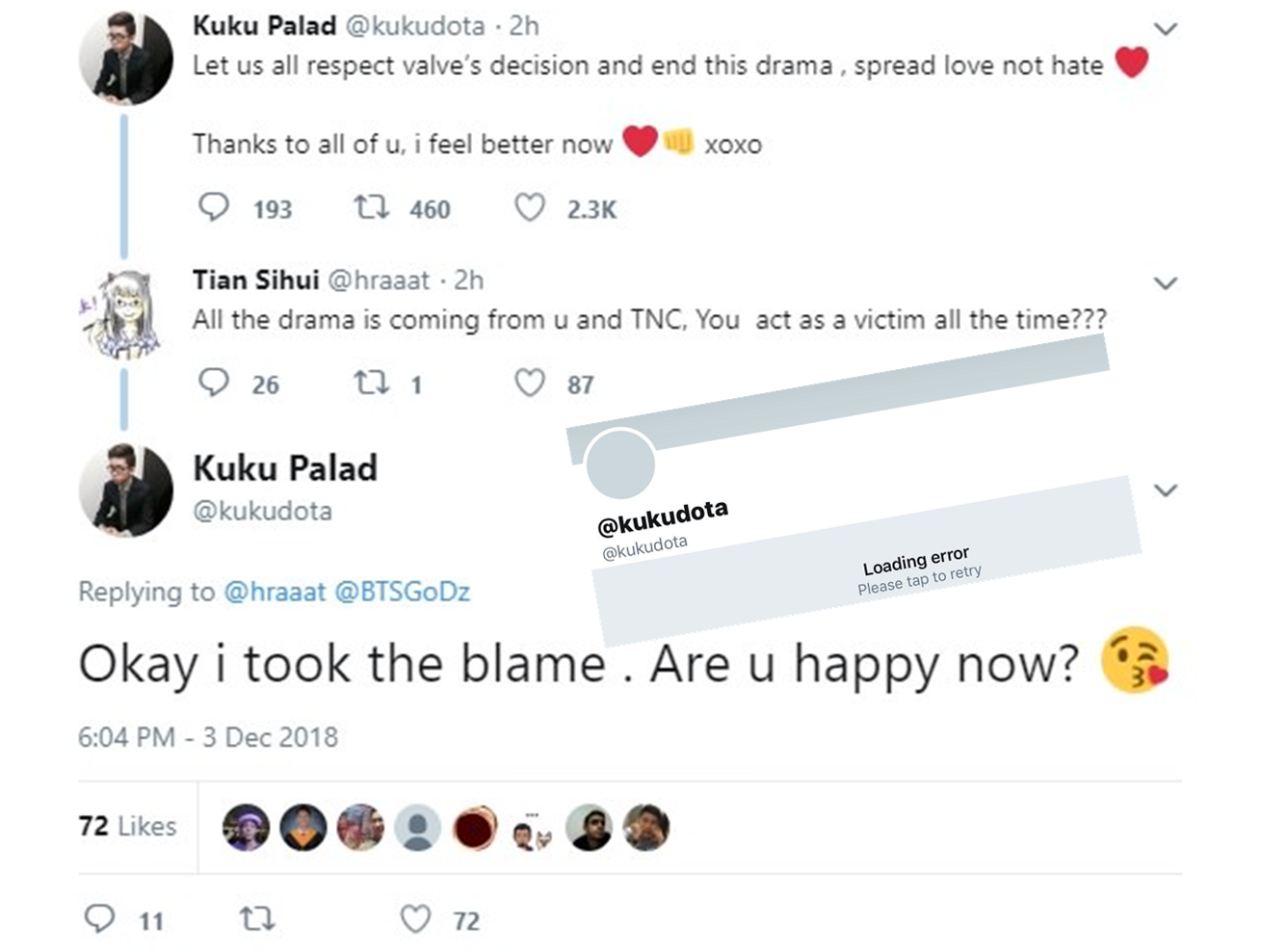 A rather recognised player in the Dota 2 pro scene, is no other than Singsing himself, finally tweeted (replied to Nahaz) about this whole drama (which he didn’t for months). Here, he addressed just how toxic the community is at creating more toxicity, be it the Chinese or Filipinos, everyone’s on the same boat. People are spamming more toxic racist stuff on streams and social medias (rip, take care VG Dota fb page). 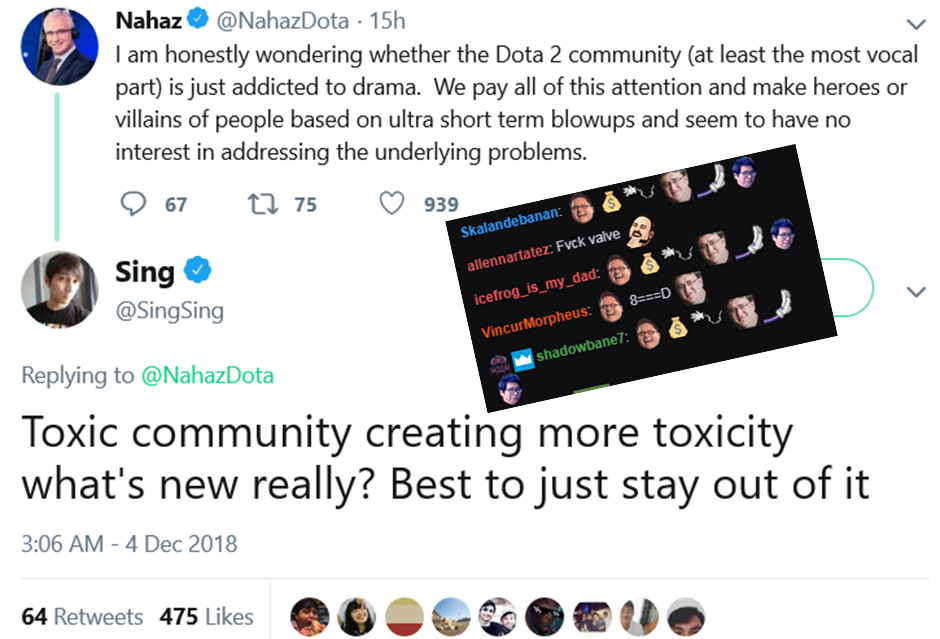 After I discussed about Ppd’s tweet about how TNC is handling this whole drama thing so badly and escalating this for too long, PPD has replied to Eri Neeman after a series of replies. Ppd stated that Eri is imagining and hoping for a world full of sunshine and rainbows while he himself realized pretty quickly that is not how the world is when he became an ADULT. Ouch! That sting like salt.

In which Eri Neeman replies, “I was fighting for a kid to get a chance to learn and grow from an ignorant mistake. Everyone deserves a chance to do that. Especially kids. If you believe that’s me thinking sunshine/ rainbows, then I’d gladly remain a child”.

Unfortunately, this was what Singsing meant about dividing the community. As everyone has their own perspective on this and takes sides, we start to see even the influencers argue publicly. Looks like there won’t be PPDay after all (Eri tweeted that the Filipino community will declare PPDay if he writes a tweet about Kuku’s drama days ago, which obviously didn’t go as expected). 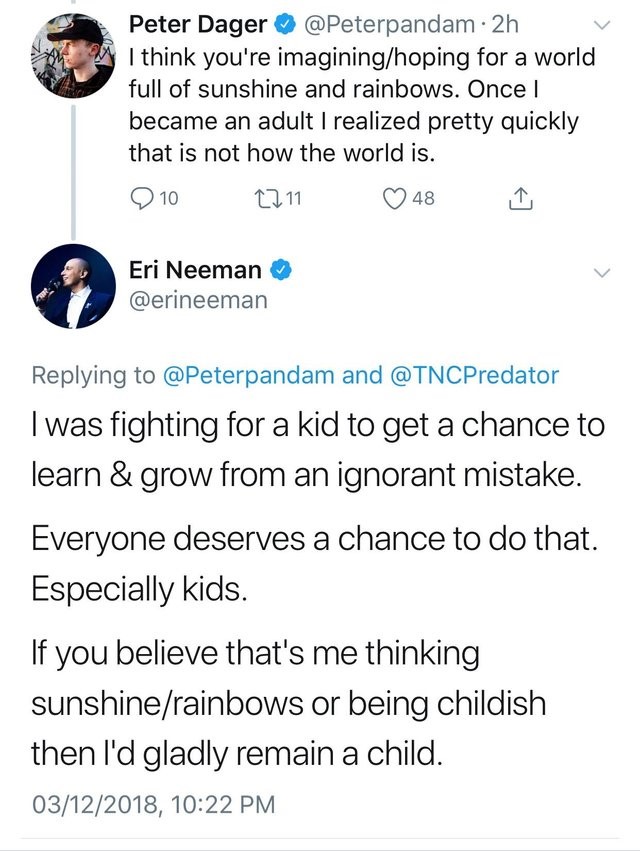 Of course, while Ppd, some of the community and even the Chinese community support Valve’s ban hammer, there’s definitely some who still questions Valve’s decision.

Some questioned if Valve knew Kuku wasn’t banned in the first place, why did Valve offered to not incur the penalty on TNC, expecting them to bench Kuku? If he isn’t banned, why would there be a need to have a stand-in?

So, they seem to believe that Valve assumes that the organisation itself will take matters into their own hands to bench Kuku without them announcing anything official. TNC didn’t and was still expecting more out of it, and in which Valve is getting real tilted about this and drops the ban themselves. 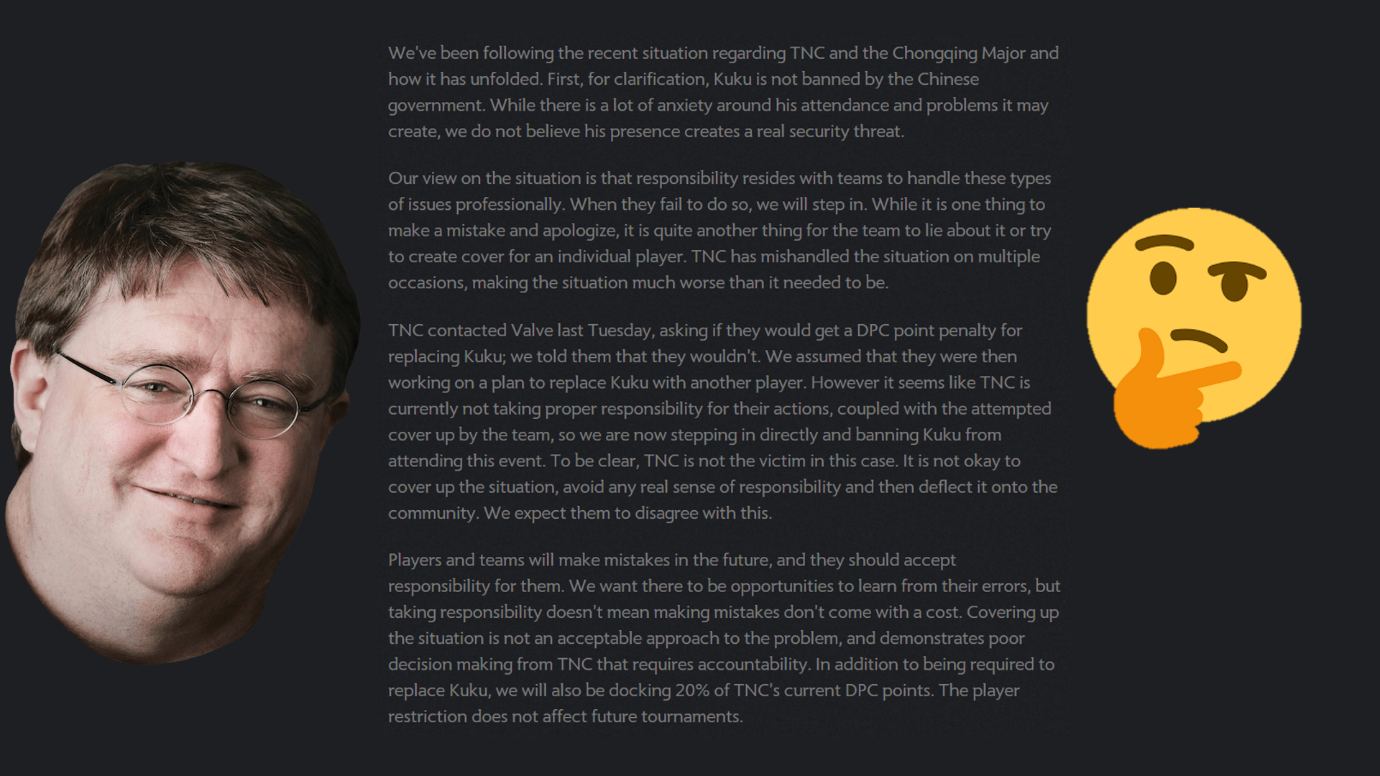 Even Tea Eye winners are angry at Valve’s decision as seen on Bulldog’s stream where he said he doesn’t want to hear his voice again and deletes Gabe’s Mega-kill announcer.

Now that Valve has released a statement that everyone has been waiting for, unfortunately, they just could not satisfy everyone in this case, either way, it marks the end of this ridiculous drama to ever begin it. Note, please stop spamming garbage messages on social medias and streams, you are just embarrassing yourselves even further. Stay tuned.