Félix “xQc” Lengyel has reclaimed his position as the highest-ranked Winston player on North American servers.

XQc has always been renowned for his Winston play within the Overwatch community. But since being dropped from multiple professional organizations, xQc has been seemingly more focused on growing his audience as a variety streamer. 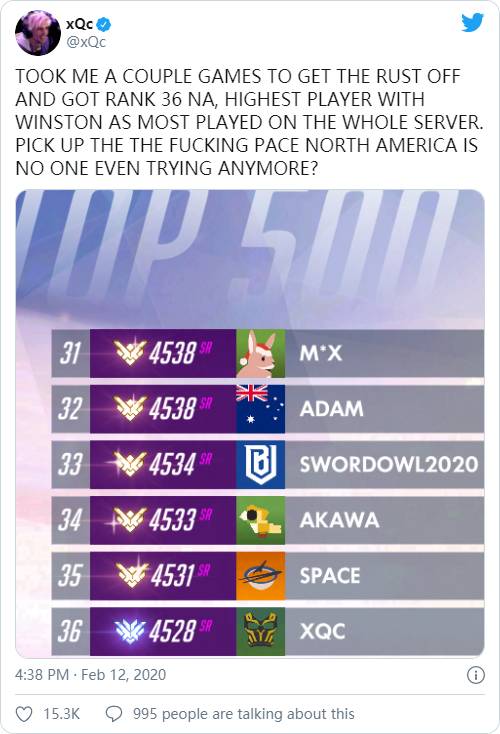 Since the oppressive meta composition consisting of Orisa, Reinhardt, and Sigma has been nerfed, however, xQc’s favorite monkey has seen a rise in prevalence among players. In the Overwatch League last weekend, several teams opted to play Winston alongside other cast favorites Tracer and Genji, effectively reinstating the Dive composition as competitively viable.

Many pro players and prominent community figures agree with xQc that the past few metas in Overwatch haven’t felt fun and that a return to Dive would reinvigorate their love for the game.

XQc has always had the talent to claim the title of NA’s best Winston. In fact, at his peak, xQc found himself starting in the OWL for the Dallas Fuel the last time Dive was meta.

With the rise of professional monkey play, perhaps xQc could see a return to competition. But with OWL teams now practicing Winston, xQc will have players champing at the bit to take away his Winston crown.