From now until Dec. 2, Overwatch fans can unlock Mercy-themed rewards by winning games in the quick play, competitive, and arcade queues. For every three wins, players will earn the following rewards: 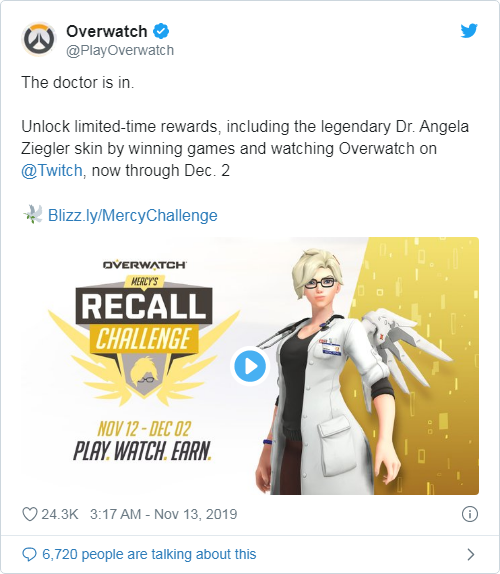 Similarly, fans can unlock additional sprays by watching participating Overwatch streamers on Twitch. Players will need to link their accounts through the Connections tab found under Account Settings. Once the two accounts are linked, fans will be able to earn up to six additional sprays by tuning into the streamers’ broadcasts at scheduled times.

The following sprays can be earned by watching Twitch streams:

Blizzard released a short story for Mercy yesterday titled “Valkyrie.” The story is narrated from Mercy’s perspective while she works at a medical camp in Cairo, Egypt. The Overwatch developer teased the new Legendary skin, in which Mercy is dressed in a long white coat with a stethoscope hung around her neck.