The Complete Guide To Hobgen: Talents, Postioning, And Strategy

The Complete Guide To Hobgen: Talents, Postioning, And Strategy

Unlike Anessix, Hogben prefers to do the dirty work himself, setting enemies on fire, and dishing out massive damage. His auto attacks apply the “on fire” debuff for 3 seconds, which burns units for 2.5% of their maximum health every second as pure damage. This makes him scale exceptionally well into the late game, when opposing units are leveled up with tons of health.

While many players may think that Hobgen is forced into certain builds, the reality is that he is actually very flexible and with the right talent choices he can be perfectly suited to many different compositions. He is slightly weaker than Anessix in the early game though, where their damage output is comparable, but Anessix provides a lot of healing as well. By the late game, his health percentage-based burn, as well as superior talent choices pull him very far ahead in terms of overall impact.

Burning Down the House — DEFAULT PICK

This is a good default pick in this tier, as it allows you to easily spread the fire debuff against opponents who stacked up. This increases Hobgen’s damage from the fire debuff, and increases his Hype generation. Everything about this talent is great!

This talent is great if you are going for a Mage build or other build who needs a lot of mana. There will almost always be several opponents on fire, so any kill will give your units some mana. Although Mage builds often do not get many kills until casting their first round of spells, meaning the mana gain is a little less useful.

Got A Light? — GREAT FOR LATE GAME & WARRIOR BUILDS

This talent is great for late game situations, especially for Warrior builds who can use the Super-Charged to buff up backline damage dealers like Arc Warden, Troll Warlord, or Venomancer. Because Super-Charged does not cast until later in the fight, it has slightly lower impact than “Burning Down the House”, which takes effect right away.

This is better against Assassin builds or when you do not have a great frontline to protect your Super-Charged targets. Ideally though, Super-Charged units are not taking much damage if your frontline can hold up.

Grease Fire — POWERFUL, BUT WEAK VS. SPREAD OUT COMPOSITIONS

Implosion — GREAT VS. SPREAD OUT COMPOSITIONS

If your opponents are spread out, then this talent makes the most sense. It increases the damage from Explosivo on the main target, but not on the adjacent targets who all share the damage.

This talent works best if you are planning to Super-Charge your frontliners and melee units rather than your backline damage dealers. You will want to position Hobgen closer to the front to ensure he Super-Charges your frontline.

A very strong talent in this tier, Hot Rod will increase his damage output from auto attacks rather substantially. It pairs very well with the Burning Down the House talent from round 10, as faster auto attacks means more spreading the fire debuff. If you are playing Mages, however, it might be best to pick another talent to maximize his Magic damage instead. 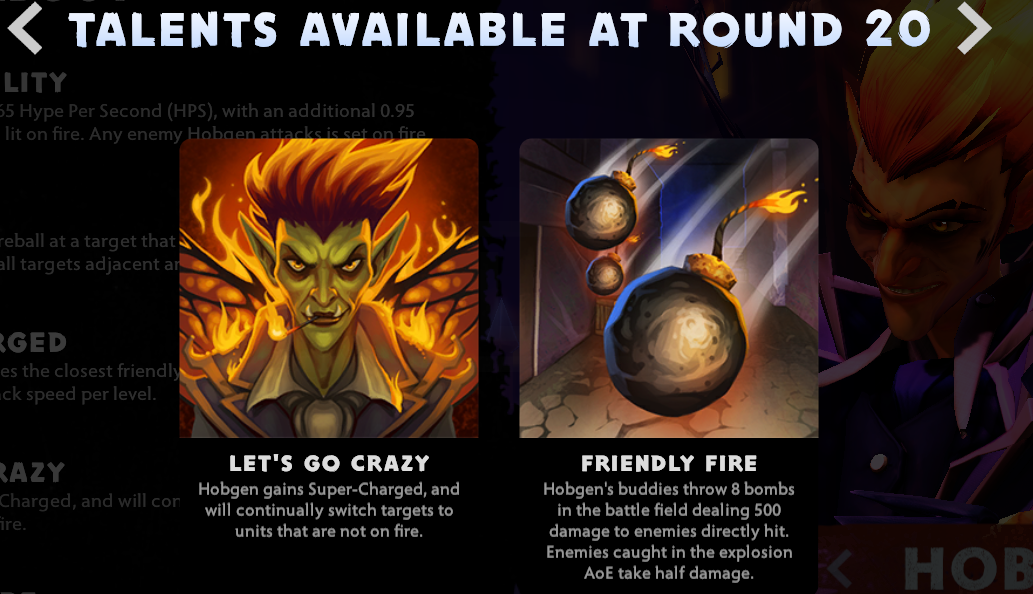 This talent looks great on paper, as it pairs very well with Burning Down the House and Hot Rod. In practice though, by the time this is cast, Hobgen will spend a lot of time casting his other abilities, Explosivo and Super-Charged, and spend less time auto-attacking. In very long fights, where you have a strong frontline, and possibly a Heartless buff, this can win out over Friendly Fire.

In most compositions, this is the better option. It is a relatively quick cast, that will deal Magic damage over time, and does not rely on Hobgen to continue auto-attacking. In faster fights, without a lot of healing and tankiness, the quicker damage output of Friendly Fire beats out Let’s Go Crazy.

This ability is fairly low impact, only affecting one square on the board and only dealing relatively low Magic damage. It is rare that this is the correct pick, especially considering the higher impact of other talents in this tier.

This one is interesting, it can really hurt an opposing Underlord, as stealing 50 Hype essentially prevents them from doing anything for a long while. The mana denial is good as well, but ideally you want to hit an Underlord with this. Since his targeting is random, you cannot always ensure that, making this a bit inconsistent.

A great talent for builds like Mages who can quickly regain mana after casting damaging spells. This is particularly potent for units like Morphling, Puck, Bristleback, and Necrophos who have low cooldown damaging spells.

This makes Hobgen a rather effective frontliner. He can draw some initial attacks and set lots of enemies on fire right away. It is a little dangerous for him to be too exposed though, since if he dies, he can not use any of the Hype, and that will also grant additional Hype generation for the opposing Underlord. This can also help to protect him against Assassins trying to jump into your backline.

If the opposing composition is closely stacked up, like Hunter in a corner, or Knights with their Alliance buff, this can disrupt their formation quite well. But the stun is fairly short, and the other talents in this tier are slightly more appealing.

Spark is best in a Mage composition to get additional casts off from a unit like Keeper of the Light. It can also be very good on a long cooldown unit like Tidehunter, Lone Druid, or Io, but positioning Hobgen to consistently Super-Charge those units can be a challenge.

Keep It Secret — BEST IN TIER

Probably the best talent on this tier, Keep It Secret is so incredibly impactful. When paired with Burn the House Down, you can quickly silence a lot of the opposing frontline, denying key abilities like Tiny’s Toss, or Tidehunter’s Ravage. Explosivo becomes an AOE silence as well, making this just an amazing talent against almost every opponent.

This seems like it would be good with a Hunters composition or other build relying on most Physical damage, but in reality, the fire debuff does not last too long and the armor shred is rather minimal. When Hobgen starts to cast his abilities, the fire debuff will fall off during his cast time. But, it can be good when paired with Got A Light talent, since the targets will be on fire for longer and your Super-Charged units will not stop to cast as long as Hobgen does.

This talent doubles down on the long fight strength of Let’s Go Crazy. The longer the fight goes, the more auto attacks come out and more burn damage over time is applied. If you picked Lets Go Crazy, then you probably want this as well.

This is better than Ya Burnt against opponent’s with healing, since it starts to take effect as soon as the fight starts, rather than waiting for his Ultimate cast. If most opponents have no healing though, this is obviously not very useful.

Friendly Fire is an Ultimate that excels at quick bursts of damage in short fights, but Sticky Strike also makes it a great long term damage output option. This should be the default choice for Friendly Fire.

Danger Close will increase your hit rate of Friendly Fire, but by the time Friendly Fire is cast, the fights are often chaotic enough that units are spread on both sides of the board. If your opponents are playing Mages or Hunters though, they will mostly stick to their own side, so this talent could be a good choice against them. 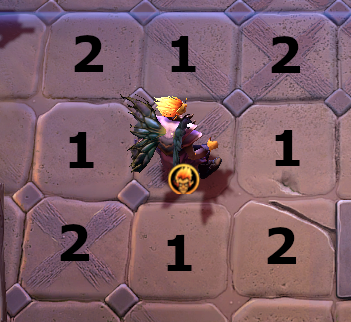 Positioning Hobgen is fairly straightforward. He is a ranged unit who prefers to be in the backline, protected from most opponents. You can position him similarly to any other ranged unit.

The only special consideration is the targeting for his Super-Charged ability. He will always buff the closest unbuffed allied hero, which means that he will prefer to target directly above, below, left, or right, before targeting diagonally. When there are multiple unbuffed units within those spaces, the target will be chosen randomly.

Of course units will move and fights will be chaotic, meaning that you cannot perfectly control this targeting. But if you have a specific unit that you want him to Super-Charge, such as a Troll Warlord or Venomancer, make sure to consider their relative positioning so that he is most likely to target that unit on the first cast.

下一篇：Autochess Invitational is over. Jinsoo won the championship!