The Complete Guide To Anessix: Talents, Positioning, And Strategy

The Complete Guide To Anessix: Talents, Positioning, And Strategy

Anessix is one of the two Underlord units currently in the game, along with Hobgen. Anessix plays like a support unit, who heals your units, summons companions to fight for her, and casting damaging and disabling spells on your enemies.

Compared to Hobgen, Anessix has much more early game strength. Her healing is very impactful in early fights, and her damage output is very respectable. By the late game though, her impact starts to fall off, as the healing is less important, and her late game talents are not that impactful.

You want many Demons with Anessix, as they increase her Hype generation and her companion counts as a Demon when triggering the Demon Alliance. She pairs best with Healer builds to increase her healing, as well as Warrior or Knights builds, whose damage reduction effects make her healing that much more effective. She can also work with Mages by granting extra mana, or even Hunters and Assassins by forgoing healing for more damage, although these are less optimal.

Overall, Anessix is currently the slightly more powerful and more popular Underlord due to her early game advantage and flexibility, although the power level between her and Hobgen is fairly close.

Easily the worst talent in this tier and possibly of any talents. The Bruiser Demons themselves are actually pretty reasonable, but they are constrained to melee range and they will constantly stay adjacent to Anessix. Avoid this talent!

The go-to talent in this tier, this is a straight upgrade to Anessix’s companion, increasing DPS substantially with no downside.

This talent can be useful if you see yourself going towards a Mage composition or any other build which has a lot of casters who are mana hungry.

The End of Medicine — RISKY

This talent is risky as you trade solid healing for increased attack damage. If you are using a Hunter or possibly Assassin composition, who really want bonus attack damage, then it could be a reasonable pick, but perhaps still no.

This talent can be massively impactful if Pure Pain affects a high priority target, significantly limiting them for 6 seconds. But it can also be fairly useless if Pure Pain hits a unit with few Alliance bonuses or Passives to Break.

Sharp Pain — GO TO OF THIS TIER

Upgrading to Sharp Pain is a strong increase in damage output, no questions about its effectiveness. As the most consistent talent in this tier, it is often the default, like Chaotic Hunter.

Despite All my Rage — TANKING ANESSIX

If you take this talent, you ideally want to have your companions constantly dying, so they respawn more powerful than before. That can be difficult to ensure, since most opposing spells and effects will prefer to target Anessix herself rather than the companions. Ideally you position her closer to the front, and hope that most opponents attack her companions rather than her.

This is primarily a late game talent that is really good at accelerating Anessix to her ultimate, which is not unlocked until round 20. Unfortunately her ultimate options are not that strong, at least not until you unlock another upgrade to them on round 35, so only pick this talent if you are sure you will make it to the late game. 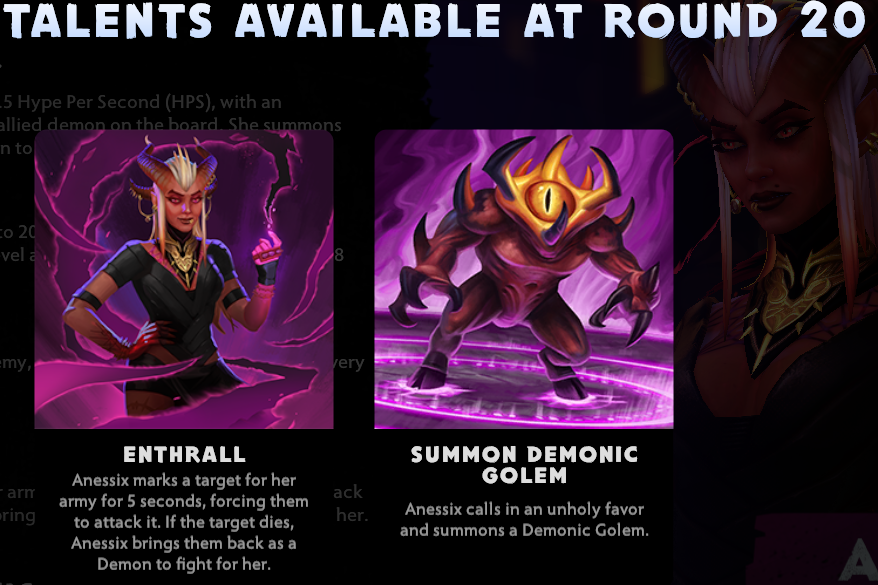 This talent it preferred if most of your damage comes from ranged units, like Hunters or Arc Warden. The effect can be quite strong, stealing a strong enemy unit for your board, if you can successfully kill them off quickly.

This talent is a bit more straightforward, it summons a large golem who can tank some hits, and deal some damage, but is generally unimpressive at both. This talent plays well with some of the upgrades on round 35, but on its own, it is lackluster compared to Enthrall.

This talent is great if opponents are running strong defensive Alliances like Warriors or Knights, as the Break effect will remove their bonus, making them very vulnerable.

This is probably the worst of this tier, since Pure Pain does not deal a ton of damage to heal up from, and by the time Anessix and her companions are taking too much damage, they are probably about to be killed quickly, healing or not.

This is a pretty powerful armor buff for your entire team. While it only increases armor for the 6 seconds of Pure Pain, that can be critical against a high physical damage lineup like Assassins or Hunters who are looking to burn you down quickly.

Instant Regret — INCONSISTENT BUT GOOD IF IT WORKS

This is a strong effect, that can really help if you are slightly behind and losing rounds. You can easily turn a few lost units near the start of the fight into a huge advantage if the opposing key carry such as Troll Warlord, Chaos Knight, or Slark gets a quick kill.

If you chose “Despite All My Rage” on round 15, this talent makes a lot of sense, as you want to have your companions killed rather quickly.

Unless you know for sure the enemy has a lot of healing on their team, this generally is less useful than Sympathy Pains. It can help to ensure a single target dies quickly but it is not often picked.

This is often the best pick in this tier, doubling the damage output from Pure Pain. It is a little less effective if the enemy team has AOE healing like Necrophos, who can negate damage on multiple targets.

This talent is the worst option in this tier, as the health cost from Martyr’s Boon is not very relevant since Anessix heals herself after casting it anyway.

This talent is strong if you are getting a unit like Tidehunter or Kunkka with Enthrall, but totally useless if you get a damage dealer like Drow Ranger or Phantom Assassin. This inconsistency makes it slightly less desirable than “Bring It Down!”.

Bring it Down — MORE DESIRABLE

You only have a limited window to kill the Enthrall target, so ensuring that it is Broken for the duration helps to get the kill. Getting the unit back with full mana is less important than making sure you get it in the first place!

This is a great option if there are stacked opponents like Hunters or Mages, who the golem can stun upon casting. The golem itself it still somewhat weak, but an AOE stun is always welcome in the late game.

This talent is best in more spread out fights, such as against opposing Assassins or Warriors. The double health total makes him a reasonable tank, and can buy time for the rest of your damage dealers to catch up and take down key targets.

The most important thing about positioning Anessix is making sure that her companion is in the correct position to be most effective. In general, her companion will prefer to spawn directly in front of her (square 1 below), but if that spot is occupied, it will be spawned directly behind her instead (square 2). 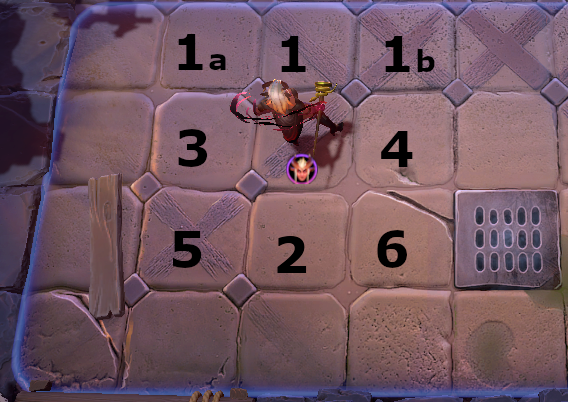 Squares 1a and 1b are used instead of 1 if the only opponent in range is off to one side, so that the companion does not have to move to get in range. After that, it will prefer to spawn in the square labeled 2, then 3, and so on.

Additionally, if Anessix is placed on the front line of your side of the board, she will try to spawn her companion directly in front of her UNLESS there is an enemy within the squares labeled 1, 1a, or 1b. In that case, she will spawn in square 2 instead. In this example, an opposing Axe is adjacent to Anessix, so the companion spawns behind her.

In this example, the opposing Axe is further away, so Anessix can spawn her companion in front of her.

You can use this to adjust positioning against specific opponents if you know where their front line is. It can ensure you spawn units in front to use with the “Despite All My Rage” and “A Demon’s Revenge” Talent, but be wary, since Anessix herself is fairly exposed.

Another thing to be aware of, is that Anessix herself will not move at all unless forced by an opposing effect. If you box your companion or other units into a corner, they may lose DPS by being out of range. In general, you want to have a more spread out approach to positioning with Anessix to avoid accidentally blocking yourself in.

In the example below, Anessix will spawn her companion in the bottom left corner, and it will be unable to attack right away because it is blocked in by the other Hunters and Anessix herself. 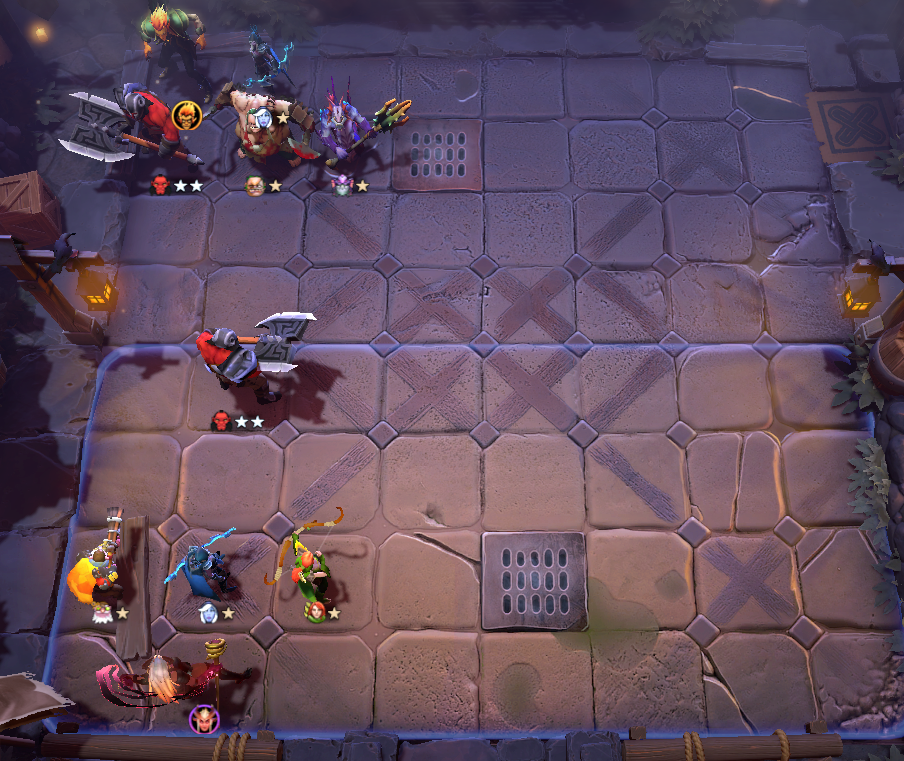