Virtus.pro withdraws from their first Minor.

Virtus.pro withdraws from their first Minor.

The recent Virtus.pro roster is definitely on a rough start in their new DPC season. While they managed to qualify for the minor, Virtus.pro feels that they aren’t going to make it far despite the achievement. Therefore, it’s rather unfortunate but it’s definitely necessary for the new team to take some time off the DPC season and focus on polishing their new line-up to prepare for the next major next year instead. According to Virtus.pro’s official statement, VP states that the minor qualifiers really showed them that the new roster has the potential to be something great but it’s just not ready for it yet. As they didn’t want additional pressure to demotivate their players, they opted out to play a much care-free yet rewarding tournament, happening just around the corner. That’s the ESL ONE Hamburg.

In their statement, VP said that there are several factors affecting their decision to withdraw, one of it being visas and despite trying everything to make it work, it was just out of their control. Therefore, the 3-times Summit champions decides to step down and not defend their throne.

That said, we can look forward to watching Virtus.pro in the ESL ONE Hamburg, as they also have a fair number of winning streaks in ESL ONE series. However, VP 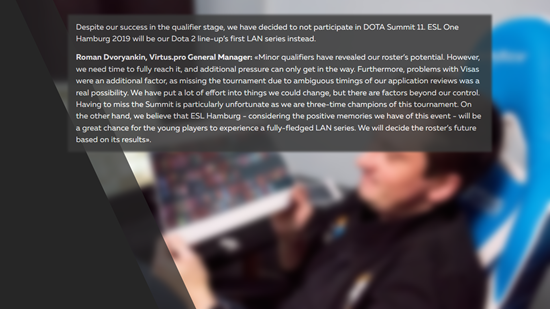 Right after BeyondTheSummit posted about Virtus.pro’s withdrawal from the Summit 11, Virtus.pro manager, Roman Dvoryankin, tweeted about being disappointed about BTS’s unprofessional announcement. He claims that they didn’t let him and the VP boys know about the announcement beforehand despite having thorough conversations since the last few days. And to make things worse, the reason stated by BTS was not accurate according to Roman.

Anyways, the guy over at BTS, David “GoDz” Parker, apologized immediately after the tweet went live, saying that they will look into communicating better in the future.

Meanwhile, Invictus Gaming has withdrawn from the ESL ONE Hamburg instead, as they didn’t have enough time to secure their visas. The team replacing IG will be WindandRain, featuring Nefrit, W1sh-, Buugi, Niqua and yol.

Unfortunately, it happens to most SEA teams as they can’t secure their visas quick enough when a tournament invite is announced just weeks before the event. 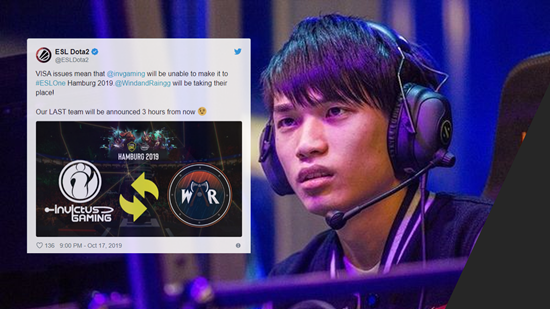 Since Virtus.pro withdrew from the minor, the boys over at Team jfshfh178 will be replacing them as they were the second runner-up of the CIS qualifiers. Featuring Palantimos, Pikachu, Kazl, Bignum and HappyDyurara.