North have announced that they have re-signed René "cajunb" Borg, who joins the team on a free transfer.

The Danish veteran will step into Valdemar "valde" Bjørn Vangså's shoes amidst reports that the 24-year-old, who had recently handed over the mantle to Nicklas "gade" Gade, will join an international roster that is being put together by Dota 2 giants OG.

cajunb was part of the original North line-up, which was transferred from dignitas in January 2017. He helped the team to win DreamHack Open Montreal 2017 and to reach the final at the ESL Pro League Season 5 Finals and DreamHack Masters Malmö before being replaced by Daniel "mertz" Mertz on the roster, in early 2018. cajunb will put on a North jersey again

He went on to play under North American organisations OpTic and Cloud9, returning to the former just two months ago, at a time when the team had already been put up for sale by the new owners, the Immortals Gaming Club. He attended ESL One New York and DreamHack Masters Malmö with the squad before stepping down ahead of ESL Pro League Season 10, where OpTic fielded Oliver "kwezz" Rasmussen as a stand-in.

"I am super happy to be back in North," cajunb said. "We have only been playing for a week, but our chemistry is really good and I am positively surprised.

"I can contribute with a lot of experience. I have been abroad two times and it has taught me a lot on how to approach the game. It has also given me discipline, and I think I can show the guys how to approach things."

North will be taking on Astralis, fnatic and Aristocracy in Group C of the ESL Pro League, scheduled for October 14-16. Later that week, the team will travel to Turkey for the eighth season of StarSeries i-League, where $500,000 will be on the line.

The loss of valde, widely regarded as the team's brightest star, is viewed by many as a devastating blow to North, who have only picked up one LAN title this year, at the four-team GG.BET ICE Challenge, in London. Still, North's Director of Esports Jonas Svendsen insisted that the organisation and its owners remain "fully committed" to esports, CS:GO and the current project.

With this change, North currently have: 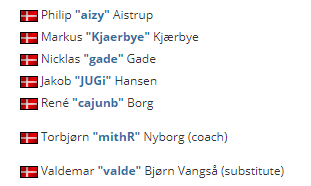