A New Era of Team Liquid.

A New Era of Team Liquid.

Chapter 1: Kuroky and the Boys.

The new DPC season has not been kind for the community. With powerhouse teams like EG losing their signature player like Sumail and Virtus.pro losing RAMZES666, who both have played for the team well over 3 years.

However, that’s not the last of it as Team Liquid announced that they are dropping their best ever Team Liquid roster to date. The roster that won so many championships and also the International 2017 for the team brand. That said, you really can’t blame Kuroky and the squad for leaving the organization.

Since, TI7, the amount of revenue shared with Team Liquid’s organization from the prize pool winnings are just absurd. For instance, winning TI7 raked 10.8M USD and fourth place in TI8, winning 1.7M USD. Then of course, the recent second place in TI8, raking over 4.4M USD too. All these totalling up to 17M USD, which a decent chunk goes to the organization itself.

So, for Kuroky and the boys to perhaps build their own team and keep the winnings to themselves, is definitely a wiser choice, since they are obviously rich enough to fund themselves and start their own org. 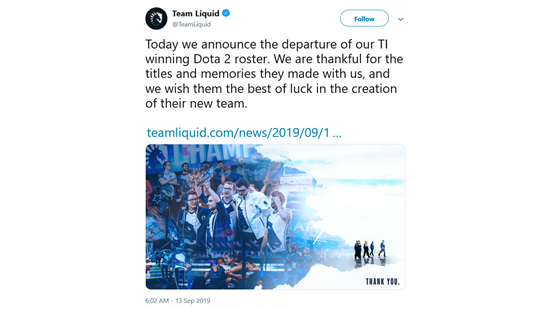 Just yesterday, the DOTA2 community is thrown with a huge surprise heading into the new DPC season, that is the legendary org, Team Liquid, picking up the recently dropped Alliance roster.

It was just a couple of days ago, when Alliance announced that the whole Alliance roster will be leaving Alliance after 2 years. Many fans felt that it was such a waste of effort and time that Loda spent training the Alliance squad to be a TI-attending team. Alliance did not specifically announce that they kick or the team decided to leave on their own accord.

That said, Liquid’s tweet did come with some interesting content, showcasing the new Liquid players, their thoughts and why they chose to play for Liquid. The team captain, Insania, expresses his thoughts and his team’s too, that they wanted a new chapter in their lives, and felt that Team Liquid is a new beginning of that. They are all fans of the former Team Liquid squad too, so that definitely is taken into account, when they were invited to play for Team Liquid.

Boxi too said that back when he was younger, Team Liquid was already a big name in the eSports, so growing up, he really looked up at the name and felt it’s cool to play for Liquid. Therefore, there’s no doubt that the former Alliance squad are really glad and excited that they are playing for Team Liquid. 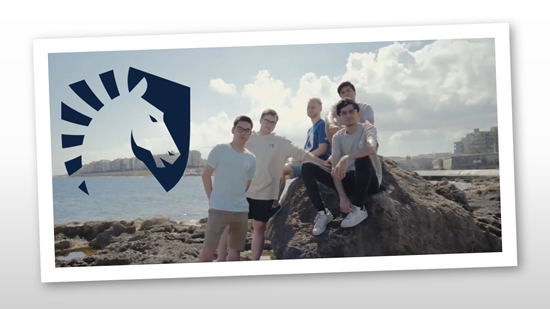 Fortunately, it’s very soon before we get to watch Team Liquid in action as the Chengdu major qualifiers begins in just 2 days. Will the new Team Liquid be able to achieve what Kuroky and the boys have accomplished over the years? Tell us in the comments! Stay tuned.

下一篇：Chengdu Major Qualifiers is a Mess.