G2 have announced that they have revamped their squad with the double signing of Nemanja "nexa" Isaković and Nemanja "huNter-" Kovač from CR4ZY.

The Serbian duo finally join the French team after a seemingly endless period of negotiations between both camps, with CR4ZY CEO Antonio Meic having revealed on September 6 that his G2 counterpart, Carlos "ocelote" Rodríguez Santiago, was attempting to poach the players.

huNter- and nexa will step into the shoes of Richard "shox" Papillon and Lucas "Lucky" Chastang on the G2 roster, which will now have to communicate in English, starting a new era that the organisation hope "will help us achieve our competitive goals and expectations." shox was on Saturday transferred to French rival Vitality, while the future of Lucky, who played his final match with the team at ESL One New York, remains unclear.

huNter- and nexa will make their debut for G2 in Malmö

G2 hope that the injection of new blood will reignite the spark in a team who have stagnated since the runner-up finish at the ESL Pro League Season 9 Finals, in June. The French team ended the first tournament season with a 5th-6th place at IEM Chicago and failed to impress at the StarLadder Major, where they went out in the New Legends Stage with a 2-3 record after failing to convert their progression matches against AVANGAR and Renegades.

In a video posted on G2's Youtube channel, Mr. Rodríguez Santiago explained that the move to an international lineup will give the team better "access to talent" in the future if needed and will allow the organisation to have a more hands-on approach in terms of managing the lineup.

nexa linked up with huNter- in November 2018, when he was snatched from Imperial by Valiance, who would later rebrand to CR4ZY. The pair have enjoyed considerable success together since then, helping the team to become a regular presence in the top 20 in the rankings over the last seven months, during which they won the United Masters League Finals and reached their first-ever Major.

“At the Berlin Major, I knew we were ready to play against the best, I knew I could compete," nexa told G2's website. "Joining G2 with huNter- is a great chance to prove what we can do, so I’m hungry to play at all the events and win trophies.

"I am ready to put in an insane amount of hours to achieve these goals. I’ve been working towards this chance forever and can’t wait to train with G2 and show the world what we’re made of.”

The new G2 roster will make its debut on Tuesday, at DreamHack Masters Malmö. The French team have been drawn in Group A, headlined by Astralis and Vitality, and will take on the new FURIA lineup in their first match of the tournament.

With these changes, G2 now have: 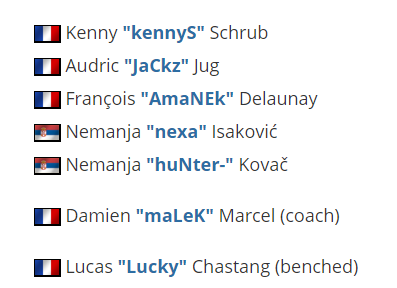