San Francisco Shock have locked down one final 4-0 of the 2019 season. The Californian team defeated Vancouver Titans in the Overwatch League season two grand finals at the Wells Fargo Center in Philadelphia today and will take home $1.1 million to commemorate their victory.

Over the season, the two teams cultivated a rivalry that would explode on today’s stage. Vancouver Titans and San Francisco Shock collided in the first stage playoffs of the season, with the former RunAway roster taking home the win. But the Shock proved their tenacity and bounced back in stage two, overcoming the Titans 4-2 after a flawless stage.

Leading up to today’s grand finals, the two teams matched each other evenly, sharing a 2-2 series record with an 11-11 map record. The grand finals would serve as the deciding series to see which competitor emerged as the better team.

The first map Lijiang Tower set the pace of the series. The two teams traded back and forth point captures and players mirrored ultimates. When San Francisco’s Kwon “Striker” Namjoo unleashed a Death Blossom on Reaper, Vancouver’s Seo “Seominsoo” Minsoo followed suit. But the Californian team took the map one victory with wins in the first two rounds nonetheless, challenging the Titans to keep up.

The Shock’s two rounds to nil on Lijiang Tower would foreshadow the rest of the series. To the surprise of many fans, the grand finals reached match point in three games. Maps two and three weren’t completely one-sided, since the Titans took their opponents into overtime for both maps. The Canadian team’s efforts failed to make a dent in the scoreboard, however, and San Francisco Shock led the series 3-0 going into map four.

Map four came down to the wire. San Francisco Shock escorted the payload through all three checkpoints, setting their eyes on the trophy that sat just down stage. The Titans made it halfway between points two and three but could not overcome their opponents in the final teamfight. 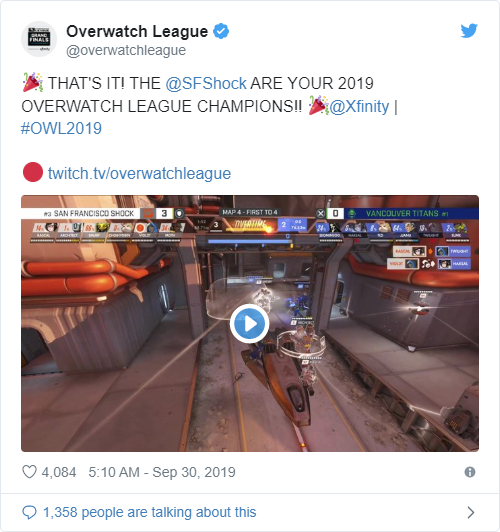 The clock expired, and confetti rained down. The San Francisco team locked down yet another 4-0 in the playoffs—but this time, it would be their final win of the season.

With today’s victory, San Francisco Shock will take home $1.1 million and the season two title. As the runners-up, the Titans have earned $600,000.