Min-Liang Tan, co-founder and CEO of Razer announced Monday, September 9 in a Facebook post that he will commit S$10,000,000 (7.2M US Dollars) in the next 12 months for the esports scene in Singapore.

Mister Tang’s initiative was sparkled in response to the continuous support from Singapore’s government for the gaming industry. In his post, he said he read about Minister Chan Chun Sing’s comments in the Parliament on the growth of the Singaporean esports scene and that he felt “incredibly grateful” for all the support.

“While I founded Razer in the US, I’m still a Singaporean citizen and we have an office in Singapore with about 500 staff (and currently building a new SEA HQ in Singapore to double our headcount over the next few years to over 1,000!)

Following Minister Chan’s comments, I’d like to be able to give back and do more for gaming in Singapore. To this end, I’ve decided to commit S$10M in funding over the next 12 months for gaming and esports activities in Singapore,” said Min-Liang Tan. The founding will go towards esports teams in the country, but will also be used to invest in gaming and esports companies in Singapore founded by Singaporeans. At the same time, mister Tang has also made clear that part of the money will be used to support Team Singapore at the upcoming SEA Games for which his company is an official partner. 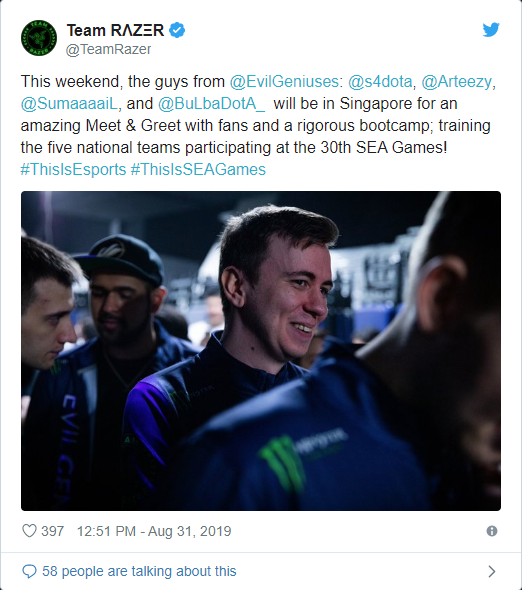 As part of Razer’s involvement with the 30th edition of SEA Games, the company has recently held a Bootcamp in Singapore where they gathered teams from Singapore, Malaysia, Thailand, Indonesia and the Philippines and invited the North American Dota 2 team Evil Geniuses to train with them.