Astralis picked up their fourth Major title after easing past AVANGAR 2-0 in the grand final of the StarLadder Major.

The Danish giants needed little over two hours to defeat the Kazakhstani side and get their hands on their fourth Major crown, ending a title drought that stretched back to BLAST Pro Series São Paulo. It was a performance reminiscent of the IEM Katowice Major final as Lukas "gla1ve" Rossander's troops were one step ahead of their opponents at all times and barely had to sweat or make crazy individual plays to come out on top. One hundred and sixty-nine days later,Astralis taste victory again and remind everyone of just how high their ceiling can be after completing a dominant playoff run with another 2-0 victory.

"We want to keep winning, we are doing everything we can to stay at the top," gla1ve said after the match before sending a message to the Liquid players. "We will climb our way back, we will take that No.1 spot again and it will happen soon."

Heading into the series, AVANGAR knew they had a mountain to climb, but an argument could be made that the map veto increased their chances, even if just slightly. Inferno and Dust2 were both maps where the CIS side had enjoyed success in Berlin, so the idea of the series going all the way was not that far-fetched - and we all knew how lethal they could be on Overpass. But they were simply no match for a red-hot Astralis team was led by birthday boy Nicolai "device" Reedtz, who delivered another fantastic individual display.

A flying start from Astralis saw them take control of proceedings from the outset on Inferno. The Danes, who began on the offensive side, controlled the space in the map and exploited some holes in AVANGAR's defense as the CIS side struggled to apply any pressure on the red-hot Terrorists. 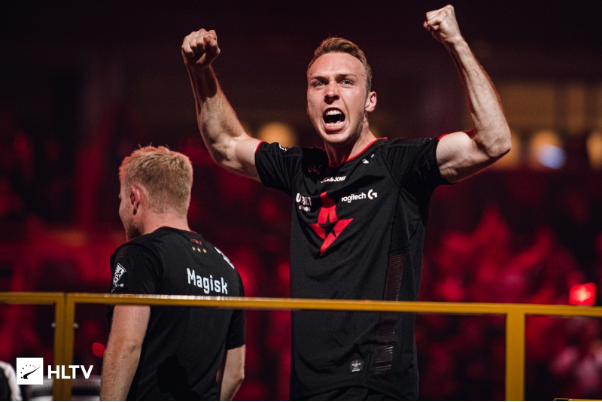 Astralis are the StarLadder Major champions

Veteran Dauren "AdreN" Kystaubayev came to AVANGAR's rescue when his team were down 0-8 with a quad-kill, leaving Astralis with no money for utility in the following round - which would prove to be key as they could not fend off the rotating CTs while trying to take control of the B site. The Danes were unfazed, though, and hit back immediately with nothing but Desert Eagles after catching Dzhami "Jame" Ali off-guard in a fast mid push. The Russian AWPer struggled to get any impact on the CT side, ending the half with just one kill as his team fell behind 12-3 in the game.

After the break it was finally Jame time. The Russian picked up three kills as AVANGAR executed B to halt Astralis' momentum, at least for a little while. That gave the CIS some much-needed breathing room, but once the Danes had money to work with they were back to the same level they had displayed in the first half as they chained four rounds together en-route to a dominant 16-6 victory.

device opened up Dust2 with a quad-kill in the pistol round to put Astralis in the driver's seat. The Danish team rode that momentum to a 7-1 lead and held off a late comeback attempt from AVANGAR to end the half up by seven rounds despite making a couple of uncharacteristic mistakes throughout the half.

Sanjar "SANJI" Kuliev still gave AVANGAR's fans some hopes with a timely flank in the second pistol round. However, those hopes would soon be crushed: Astralis rallied back on a force buy and did not take their foot off the pedal, winning the next four rounds in convincing fashion to wrap things up. 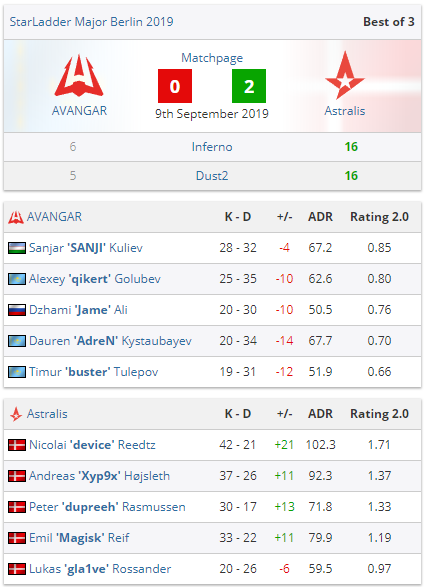 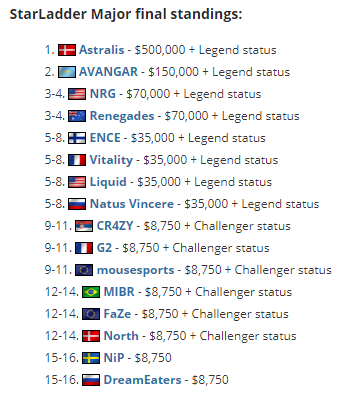