After the report about G2 scouring the market for two new players, the other top French team, Vitality, have announced that they are benching Nathan "NBK-" Schmitt.

Vitality broke out earlier this year, winning cs_summit 4 and the ECS Season 7 Finals, and became a regular making playoff runs at Big Events, eventually landing the #2 spot on the world ranking in July behind Liquid. NBK- has been moved to the bench

Good results aside, Vitality’s hopes of making a deep run at a Major were halted early in Berlin despite making it out of the group stage with victories over FaZe, North, and mousesports, and their only loss coming in a two-map series against ENCE. AVANGAR, the first team to secure a bert in the grand final, was the team that stopped Mathieu "ZywOo" Herbaut and company on their tracks with a 2-1 series win in the quarter-finals.

According to information gathered by 1pv.fr, tensions had been mounting within Vitality for the past few months, causing a rift between NBK-—who recently lost his role as leader and captain—and the rest of the team, which eventually ended in the player's benching.

Some names have been leaked as possible substitutes, such as that of Fabien "kioShiMa" Fiey, although no decisions on the matter have been made as of yet.

With NBK- on the bench, Vitality's roster looks as follows: 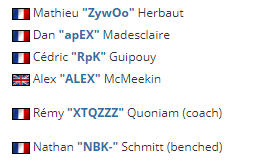