Fnatic announce their roster for the 2019,2020 DPC season

Fnatic announce their roster for the 2019-2020 DPC season

The post TI9 roster shuffle is just beginning to stir and not a lot of the prominent teams have shown their cards yet. But Fnatic found no reason to keep the community waiting on the news of their new roster and there are a couple of surprises in there. Three of the players will be the same as the ones from last season but there will be two fresh faces fighting in the orange of Fnatic. 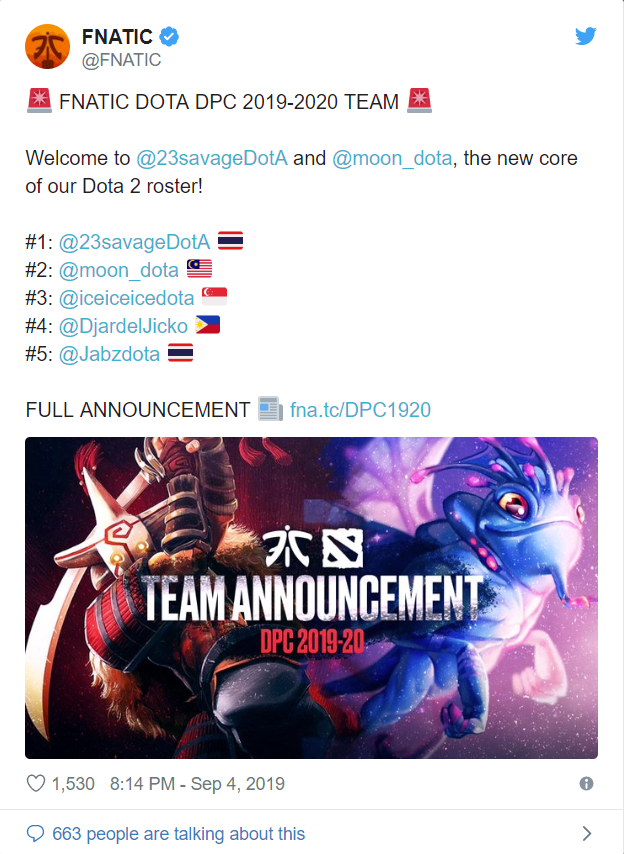 23savage, the player who nearly qualified for TI9 with Jinesbrus will be the new carry for Fnatic while Moon or NaNa, as he was known earlier, will be jumping ship from Mineski to join Fnatic. Moon played for Mineski for the last two DPC seasons. He will be pairing up with his old team mate, iceiceice, who was with him in Mineski for the first of those two seasons. Jabz, who had shifted to carry just for TI9, will go back to his preferred position 5 role.

The arrival of two new players means the end of the Fnatic journey for two others. One of them is Dubu, who had joined just before TI9. But the other one is a big name – Abed! Abed was with Fnatic for nearly two years and he was their talismanic player. Moon has got some big shoes to fill!

Fnatic has not had the best of seasons the last couple of years. Last year’s roster was a strong one, but they fell off as the season went on. This roster definitely has the potential to do great things, and the organization will be hoping they can better their result from the last two TIs, where they got ousted in round one of the lower bracket.

The big question now is where Abed will be going. It seems like he has been around for a long time, but he is still just 19 years old! Abed has played with Digital Chaos before in North America, so he is no stranger to playing away from SEA. It will be interesting to see if his next destination will be Europe or CIS, as the word around the block is a lot of teams there are looking for new players.