OG claim the Aegis at TI9 and become the first team to win TI twice!

OG claim the Aegis at TI9 and become the first team to win TI twice!

It took nine iterations of The International to get a repeat winner, but it has finally happened! OG, who won TI8, also claimed the Aegis at TI9 after a dominating performance against Team Liquid in the grand finals. OG beat Liquid 3-1 in the grand finals in what started off as a tough series, but ended as a rout in favour of the Green Dream! 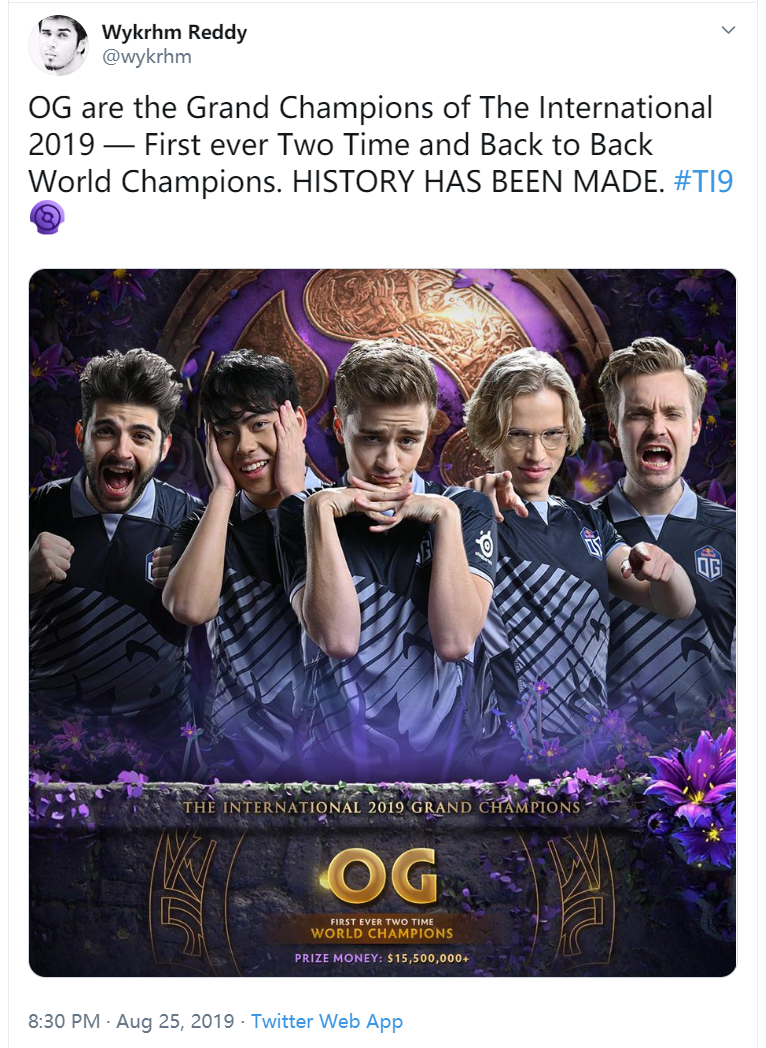 Before TI9, there wasn’t a repeat winner neither in the form of a player not organization. Coming into TI9, OG hadn’t had the best of seasons and no one was expecting them to repeat the feat from last year. But as their captain Johan ‘N0tail’ Sundstein said, this teams thrives when they are the underdogs and that’s just what happened. Just like in Vancouver, OG did not drop a single series on the main stage in Shanghai (or the group stages!) and made history with a second TI title.

Game 1 was very much like an Alfred Hitchcock movie, going as per the expected storyline with an insane twist at the end. Liquid were playing a fast draft with the Templar Assassin and Meepo, planning to finish the game before OG’s Spectre came online. They showed the TA, who is usually played by w33haa, but later picked the Meepo which meant it would be a Miracle TA. Liquid’s plan was working till a point, but once Spectre hit her critical mass, OG took over. Just when it seemed OG would be running away with the game, Liquid, with the use of a few buybacks and a Silver Edge on the Meepo, team wiped OG including the Spectre and marched down mid. Spectre had a buyback but held on to it for too long and by the time she did buy back, Liquid already had taken down the tier 4 towers and the Ancient went down before OG realized what was happening. First blood to Liquid!

Game 2 was completely unlike game 1 – it was a one sided beat down. OG realized Liquid will keep going for the TA and picked up the Monkey King, a hero not too popular at TI9, but one of Topson’s best heroes all the way back from TI8. After the laning stage broke up, OG’s three cores were just running all over the map getting kill after kill after kill! TA had a bad laning phase and the Lifestealer needed time to finish a Radiance. OG never took their foot off the gas pedal, finishing Liquid off in 33 minutes to level the series 1-1.

If Liquid and their supporters thought it couldn’t have gotten any worse, they were wrong. This time around, Liquid banned the Monkey King, but OG just picked the Pugna for Topson to counter the TA. It was the Topson show throughout the game. He got a Veil of Discord in 6 minutes and ran all over the map killing people, ending the game with a score of 17/3/11, all in just 24 minutes!

In game 4, Liquid decided to mix it up a bit by banning the ET and letting the Wisp through. OG did not hesitate one bit as they first picked the Io. Before this game, they were 5-0 on ana’s Io and there was no reason not to pick it. Liquid picked a Bristlenback and Windranger to counter it, but it wasn’t enough. Like all the carry Io games, OG trailed a bit for a while until Io got his Aghanim’s Scepter and the level 15 +75 Spirits damage talent after which, it was a bloodbath! In this particular game, Io got level 15 when Liquid were pushing high ground wtih an Aegis on the Bristleback. Topson’s Gyro built a diffusal and made sure the Bristleback didn’t have any mana. With that, they just team wiped Liquid while ignoring the Bristle and then killed him twice. After a few short minutes, it was OG taking racks and eventually bringing out the ‘gg’ calls from Team Liquid. History had been made!

It is the end of another Dota 2 season, the 2018-2019 DPC season. It was an amazing year with some great Dota 2 action and a fitting finish. TI9, even though it didn’t have a great grand finals like last year, had some insane games throughout the week. The next thing to look forward to for the Dota 2 community is The Outlanders update, which will bring two new heroes to the game – Snapfire and Void Spirit. Until then, let us all revel at OG, one of the (if not the) best teams to have embraced this amazing game called Dota 2…

下一篇：The International 2020 will be held in Stockholm, Sweden