Vici Gaming Fades away from TI9.

Vici Gaming Fades away from TI9.

As we head into our final day of the International 2019, we are down to our top 3 teams left, featuring Team Liquid, PSG.LGD and OG, who shall be waiting for the other finalist between Liquid and LGD.

While Internationals are always depicted as the glorious event that sparks joy in everyone’s hearts, sometimes we should look at the behind-the-scenes that happen when a series ends. Vici Gaming, led by veteran rOtk, has finally fallen to Team Secret.

While securing top 5 in the International is already a big feat itself, we should also acknowledge VG’s DPC run that turned out better than everyone expected. They went from qualifying for only a minor, the Starladder ImaTV minor, but managed to become the Champions! With that ticket secured for Dream League S11 major, they were clearly the underdogs yet they surprised everyone once more with a nail-biting grand finals against Virtus.pro. It took them all 5 games to win the major, 3:2. It was after this achievement that VG begun to be confident in their skills.

Heading into EPICENTER 2019, they once again got themselves up till the grand finals again. This time, it was facing Team Liquid with w33. Yet, it was a close finals with a score of 3:2 in favour of VG. At this point, VG is one of the two China’s biggest hopes to win TI9. With a third place in DPC rankings, I don’t see why not. 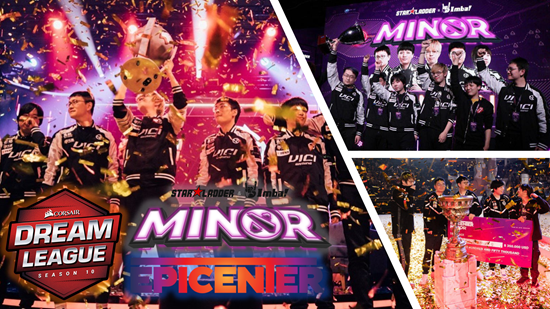 VG got into the upper brackets with flying colours in group stage. However, they had to meet their inevitable destiny, to face PSG.LGD, who both sides respect each other so much. LGD players use VG’s teleport banner to show their support for their Chinese brethren.

Anyways, LGD proved to be the better team as they send VG down to the lower brackets to face Team Secret. While Team Secret had sloppy performance on their first day of playoffs, especially Midone. Midone coming into the next day looked way better than before and apparently according to an interview by Sheever, Midone has been caring about his numbers and stats, creating unnecessary stress for himself. Once that was let go, we see him back to his former glory in no time. Unfortunately for VG, Secret stomped through them with a clean sweep, both games ending within 25 minutes. Team Secret borrowed a little strat from their good friends over at OG, picking Io for Nisha and he’s just unstoppable. While VG managed to shut Midone’s Gyro at mid, it wasn’t enough as Secret’s lineup becomes a death ball in no time!

Looking at game 2, Paparazi picked Alchemist but Team Secret were able to shut him down and end the game before he gets to have any impact. Compared to ana’s Alchemist in the game against LGD, it was a huge disaster for VG. With all VG players dead, VG had to call GG and are eliminated as the fifth placed team in TI9. While it’s sad to see Fade look so miserable, we hope that VG could rise back up next season for another shot at TI10 as promised by Fade in his interview with Sheever. (Warning: May cause shedding of tears. Watch at your own risk.)

Anyways, we look forward to today, the semi-finals to start the day and a grand finals to end it. In less than 12 hours, a new Champion will be crowned (unless it’s Liquid or OG). Stay tuned.

下一篇：Bulba: "Nisha and Zai are two of the best players of the year"