Another Main Event day has passed and this time two teams made their exit after a gruesome Bo3 series. There were surprise outcomes, insane combos, and notable moments today, so let us take a look at how each series went. 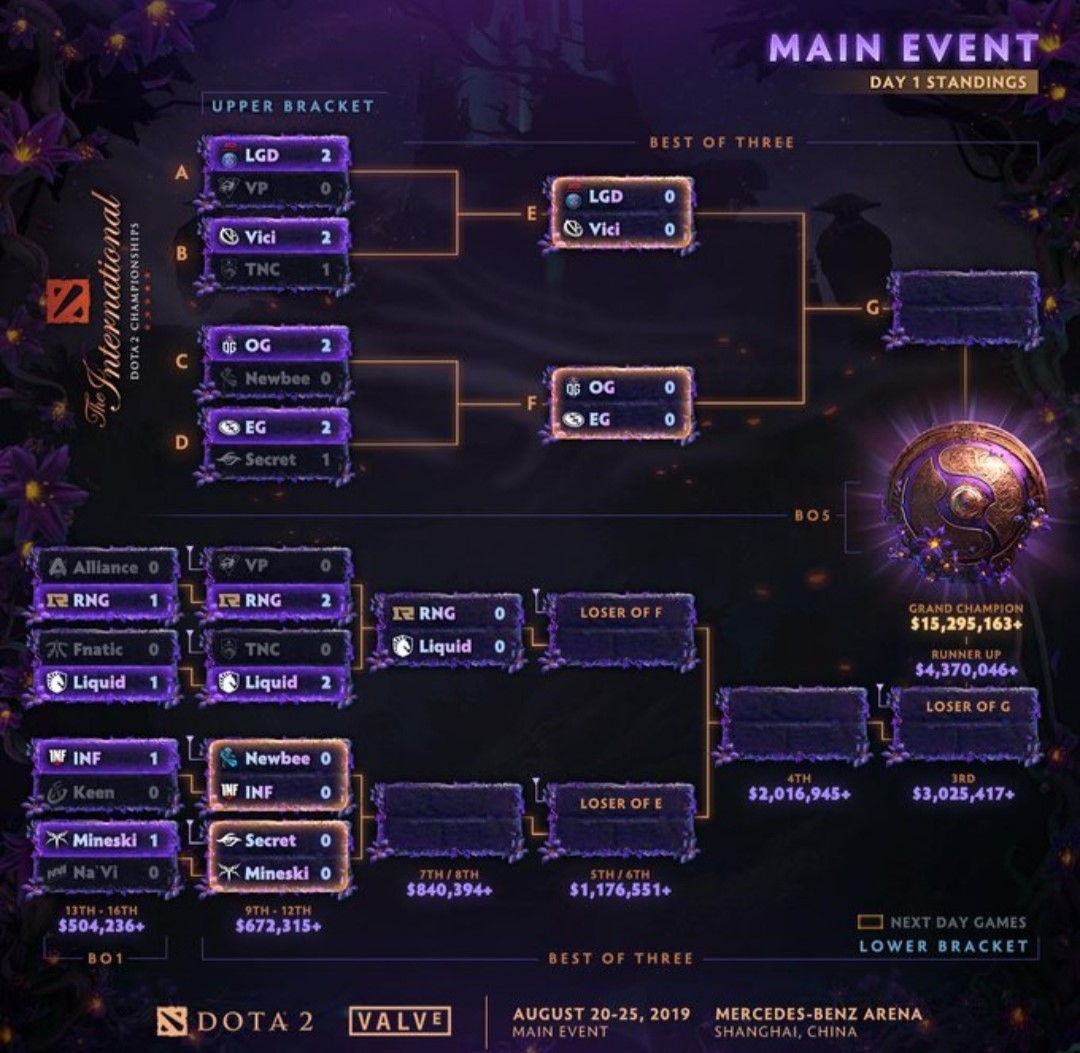 In their first game against Newbee, OG drafted an Io-Bristleback combo with Ana and Topson. In the early game, things looked well for Newbee and managed to farm key items on Yawar Naix and CCnC Tiny, but the moment Ana got his Aghanims and Crimson Guard on BB, OG began to overtake the game. Even when Yawar got his Radiance, OG was too tanky and strong enough, even diving Newbee in their own fountain. After 27 minutes, OG takes game 1 at 23-8 kill score.

For game 2, a last pick Topson Monkey King sealed OG’s series as Ana’s 12/0/10 Juggernaut, Topson’s 17/2/13, and Ceb’s 1/4/25 Magnus that rushed Greaves at 22 minutes picked off Newbee around the map. With every kill, OG took Newbee’s towers one by one, Newbee tried to fight back, but Yawar Sven and CCnC Ember with a combined total of 28k gold was no match for Ana and Topson’s combined 45k networth to end the game at 34 minutes with 35-16 kill score in favor of OG to advance to the next round.

In the first game of the second Upper Bracket match this day, EG started strong with S4 Centaur and Fly elder Titan with assists 30 and 25, respectively. These performances became better as EG took their time and let Sumail Leshrac and Rtz Sven do what they do best- control the tempo of the game. Rtz’s 13/3/15 and Sumail’s 12/1/23 pinned Team Secret to 48-12 kill score to give EG the first win of the series.

In the second game, it looked like EG had the series in the bag as they conquer Team Secret’s high ground, but Puppey’s squad knew they had the long game as Nisha Faceless Void, Zai Enigma, and Midone Invoker got their refreshers as they approach the hour of the game. EG had the advantage, but a combination of Chrono, Cataclysm, Double Black Hole, and another Cataclysm from Secret wipe EG and gain a 7k gold lead for the first time. With that, Secret began their comeback, but as Sven diebacks, EG had to call gg with 29-29 kill score at 63 minutes to go into a deciding game 3.

The final game of the intense series, EG gave a last pick Phantom Assassin to Rtz, with Sumail Ember and Rtz securing a BKB at 23 minutes, and Crit Magnus getting Blink at 18 minutes, Secret’s burst lineup became a window for EG to pick off Secret and rise to a 14k gold lead. Despite Secret killing EG’s cores later, the gap was too far for Secret to catch. At 42 minutes, Secret concedes defeat with a 26-14 kill score in favor of EG.

Series 3: The underdogs take out the Bears

This third series came as a shock as favored major champions, VP ended their TI contention at the hands of the Chinese underdogs, RNG as they were swept in two quick matches.

In game 1, Monet’s 878GPM Alchemist handled the late game after VP managed to regain the map advantage. VP’s teamfight-oriented draft was no match as RNG just went and sacrificed themselves to ensure the survival of Setsu Leshrac and Monet. Within 30 minutes, a well-farmed Alchemist deemed to be too strong even for the Bears as they call gg and give RNG the lead going into game 2.

VP and RNG tried to take the early game lead, but VP held on to their lead, but they didn’t know that this is just enough space for RNG to stage a comeback as Monet and Setsu finish their BKB’s, RNG setup fights with Chronos, and what seems to be an impossible goal was attained as VP taps out of The International at 33 minutes with a 20-16 kill score in favor of RNG that was carried by Monet’s 12/0/7 Faceless Void performance.

The last series of today was a turning point for Filipino fans as TNC predator began game 1 against Liquid with great rotation and pressure from their supports, but the TI7 champs showed the crowd once again why they are the kings of the lower bracket as they began to convert the 4k disadvantage into a 15k networth advantage as Miracle Troll Warlord wins the game with an Ultra Kill at 33 minutes

For game 2, an Anti-mage last pick for Miracle proved to be the better counter for TNC. TNC was able to take some T2 towers and kills from Liquid, but the elusive Miracle cannot be locked down. As a result, an Anti-Mage with Fury, Manta, Skadi, and BKB at the 30 minute mark deemed to unstoppable for TNC, they fought back and held on to the game, but Miracle’s 9/0/6 clean AM game send the Filipinos out of TI at 45 minutes as they call gg.

What do you think of today’s matches? Share your thoughts in the comments and stay tuned for more!