Two more advance to the semi finals at TI9

Two more advance to the semi finals at TI9

OG and Evil Geniuses prevailed in the upper brackets of TI9 to advance to the semi-finals.

The upper brackets of second day of TI9's main event is already in the books. Two more teams prevailed, taking the high road towards the finals, inching their way closer to the Aegis of Champions.

OG are showing no signs of slowing down. In fact, Anathan "ana" Pham continues to play on an entirely different level, clearly eating a breakfast of champions each morning.

OG absolutely shellacked Newbee in both games, yielding a clean and tidy sweep that looked like a cakewalk. Sticking the core IO in the first game for Ana worked once again, but OG isn't a one-trick pony and a flawless game on Juggernaut by Ana in the second game with a 12:0:10 record was a fatal blow to the North American squad. 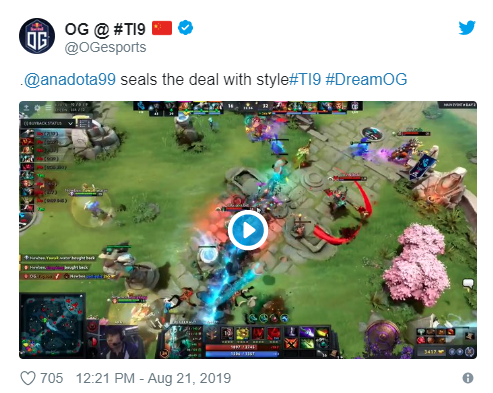 While Team Secret dominated in the group stage, Evil Geniuses stumbled, fell and then rose. Looking at the difference in group stage gameplay, most fans pegged Team Secret as the favorites, only to their dismay.

EG pulled out an amazing first game. An early lead gave EG the edge and Team Secret tried to turn things around about 30 minutes in. However, round after round of kills by EG, Team Secret was not able to find any openings or relief. Even with the Chen creeps doing the hard work, EG's power and game sense were insurmountable for Team Secret as they fell hard in Game 1.

The second game didn't go much better for Team Secret. Pick off after pick off, Evil Geniuses chipped away at Team Secret, leaving them crippled. The European titans couldn't even initiate team fights and often when they tried were unsuccessful.

Despite being on the back foot, Team Secret managed to keep things going and delay the game to create an even playing field 50 minutes in, and eventually the lead. With an incredible turnaround thanks to Team Secret's patience, team fights, and decision making the Europeans ratcheted up the intensity and raised the tension and pressure to peak levels. With a phenomenal combo, Team Secret wiped out EG with no buy-backs and claimed the game in a spectacular fashion and tied up the series. 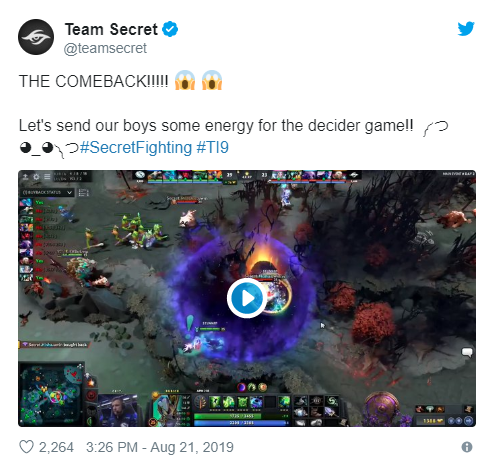 In the final game, an even start led to an eventual early-mid game lead by Team Secret with the Europeans and their 10k gold lead already heading for high ground 20 minutes in. Pressing their lead with a quick tempo, Team Secret forced EG into an early defense and putting a strain on the North American Giant's resources.

EG pulled it back again and again, slowly chipping away at Team Secret's lead and then an incredible fight 30 minutes in gave Evil Geniuses an opening to dive into and gain some momentum. In a matter of just four minutes, EG brought Team Secret's gold lead down to only 5k and starting taking the European barracks - completely turning the game on its head and ultimately took the game and series.

Newbee and Team Secret will now aim to battle their way back through the lower brackets. OG and EG will face off once again as each team jockey's for the upper bracket finals and hope to make history as a two-time championship team.

下一篇：VG won the game BUT TIMS WON OUR HEARTS.