It was 4 years ago when DOTA2 which was initially powered by the Source 1 engine, evolved to Source 2, named Dota 2 Reborn. While many things have changed for the better and graphics look much more cooler, the community still missed some features from the original DOTA2 engine.

That’s the custom hero grid. Back then, players can customize what heroes to show on their hero pick interface, while you can’t actually do anything other than moving it around, it was still better than nothing at all.

Chapter 2: Our Prayers are Heard.

This week, the Summer Scrub: Part 2 update finally went live and the custom hero grid is back! But this time, it comes load packed with much more functions to play around. Of course, our glorious community did not waste any time to start creating some top-tier ideas.

One of the coolest ones is definitely the rainbow-themed arrangement of heroes (top-left). Despite being just as tough to navigate and remember hero’s colours, it still looks pretty cool. Then there’s also others who use the new feature to show the layers of Earth (bottom-left) and another one categorising heroes based on number of legs (bottom-right). Lastly, it’s the representation of the DOTA2 map in heroes (top-right). Somehow, I didn’t know I needed this until I saw it right now. Credits goes to Reddit users, Cola-cola, GAnaD, GeometricJellyfish and pootatoss for the respective posts.

While some put their effort to good use such as this Rainbow styled arrangement of heroes and some used it for educational purposes, there are those out there who created memes even if it was harder than usual.

Starting off with the JoJo meme, where the scene depicts Dio approaching Jotaro for a battle. Dio asks, “Oh? You’re approaching me?”. Credits goes to Reddit user, Zeawesomeguy. Alright, I don’t want to be a weab, so no more anime-related posts.

Next off, it’s the “Is This a Pigeon?” meme from a classic anime, here it’s instead, “Is this a meme generator?” in reference to the new grid feature.

You had enough of those? Here’s more, such as the Me and the boys meme and the classic Dark Willow joke too, by zimmre and Zexer_Alphius. Of course, we have to end it with a comparison and Cliffteezy meme too by Haaaaaaaaaaaaaaaaat and migu63. 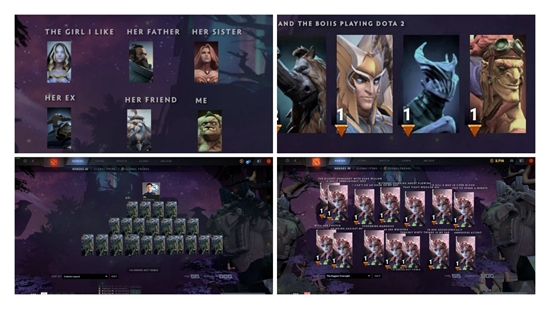 While the custom hero grid is already a cool feature as it is right now, I think a more interactive interface that lets players auto-align the columns and layout just for the sake of all those OCD users out there. As suggested by Shurukan, the auto-alignment and snapping features will be useful in making the customized grids look more professional.

That said, we really have to give Valve and the DOTA2 development team a round of applause for delivering such a crazy update just a week before TI9. The fact that Valve finally listened to the community’s opinions gave us all hope that Valve isn’t like any other gaming companies out there who would ignore their customers and still squeeze the cash out of them. Also, credits goes to all the original Reddit posters of the images used, thank you.

What do you think about the new custom grid feature? Post your custom hero grids in the comments! The most liked comment gets a like from me. Stay tuned!