Bot TI is back for a second year

Bot TI is back for a second year

Open Qualifiers for The International 2019 may only be a few hours away but next week, another massive TI event also kicks off as Beyond the Summit bring us BOT TI 2019 – the second iteration of the weirdly enjoyable tournament.

Bot TI is played by absolutely no players and there is no prize pool due to this – because it is played by bots. No, not giant robot versions of our favourite Dota 2 heroes – although that would be great – but instead it merely pits the easy bots against each other in quick 30 second teamfight matches. The matchups are all best-of-three where each game gives the bots better items and higher levels. 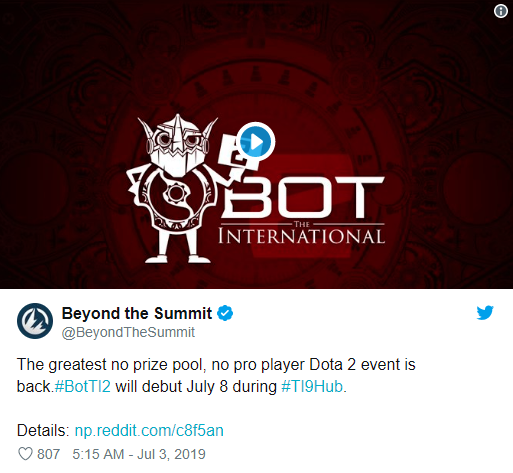 The bracket, skills and items are all seeded via DOTABUFF’s hero win rate and most commonly used items and skill choices – except that skills such as Crystal Maiden’s aura will not be picked due to the matches being only a single team fight. Certain items are also banned; Black King Bar and Blademail being the two unavailable to the bots this year.

While this tournament means absolutely nothing in the greater scheme of the Dota 2 Pro Circuit and The International 2019, it is an extremely entertaining viewing experience and the BTS team make it worth watching. Alongside that, it gives us some weirdly wonderful Dota 2 action as we countdown the days to TI9 as well as a ton of laughs, such as last year’s “Enigma Profile” which can be seen below.

You can catch the start of Bot TI next week on July 8th as the round of 128 kicks off during the TI9 qualifiers.