Dota 2 Patch 7.22d is out and brings with it a lot of hero balances

Dota 2 Patch 7.22d is out and brings with it a lot of hero balances

The last Major of the DPC 2018-2019 season – the Epicenter Major – is over with Vici Gaming edging out Team Liquid 3-2 in the grand finals. Just as the final ended, Valve released a new patch in the form of 7.22d. 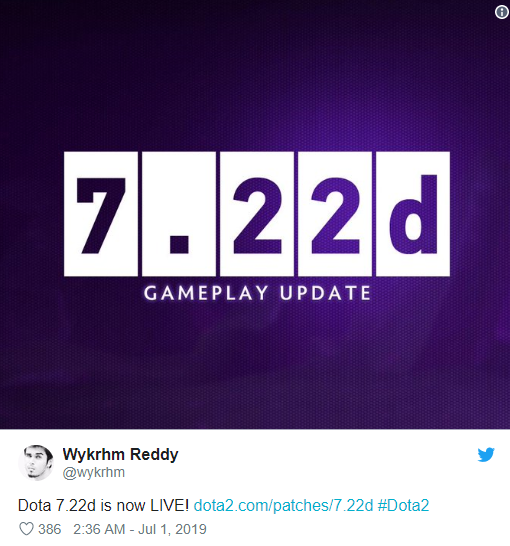 Patch 7.22d is all about balances with a lot of buffs and nerfs being introduced, mainly for the sake of the TI9 qualifiers. VPEsports will have a more detailed article coming up later with which heroes will be affected, but for now, let’s take a quick look at the big changes.

Big change for Grimstroke with the Soulbind slow receiveing a heavy nerf. A lot of times, Grimstrokes players would cast Souldbind on an important target just to slow him/her down without the hero being bound to anyone. That won’t be the case anymore.

The ‘Tether Grants Scepter Bonus’ talent has been removed from the game! That was one of the talents that made Io-Copter such a threat. This will bring some more reconsideration to the Wisp pick.

One of the major tools in TA’s arsenal for lane domination was the damage she did to opponents with Psi Blades while denying creeps (especially with Refraction turned on). This won’t make a difference in the game when the laning stage has broken up, but will play a part while laning.

The biggest nerf of the 7.22d patch! Fatal Bonds on Roshan used to be a huge weapon during Rosh pit fights and a double Fatal Bonds with Soulbind would mean a high chance of a teamfight win. Now, the second Fatal Bonds will priotitize targets which haven’t been bound with the first one. Warlock is not happy right now (even though he was a part of the winning draft in the last game of the Epicenter Major).

The TI9 qualifiers start on Wednesday, the 3rd of July which is just three days from now. Teams will have only those days to figure out which new heroes are good and which ones aren’t. Well, they better make sure they do a good job at it because the prize is a chance to play in the biggest esports competition of the year – The International 2019!

下一篇：Vici Gaming are the champions of the EPICENTER Major