Another damage-dealer has said goodbye. Choi “Asher” Joon-seong, a substitute DPS for the Toronto Defiant, has announced his retirement from professional Overwatch.

During the first season of the Overwatch League, Asher played for the Los Angeles Gladiators. He quickly made a name for himself as an expert Tracer player, though he was able to flex to many DPS heroes. The Toronto Defiant picked up Asher as a substitute DPS before the beginning of season two. Asher played a single game for the Defiant on April 5, helping them defeat the Washington Justice. 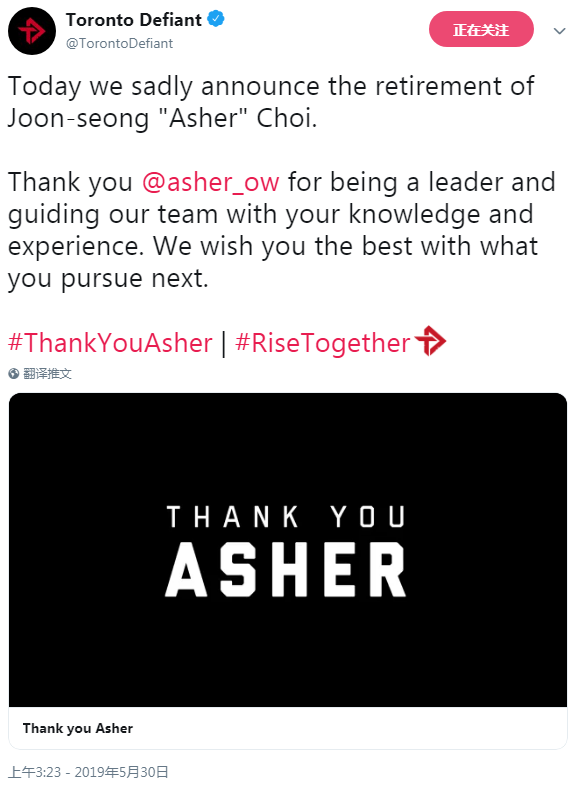 The Defiant promoted tank duo Daniel “Gods” Graeser and Normund “sharyk” Faterins from their North American Overwatch Contenders team, Montreal Rebellion, last week. The Toronto Defiant currently sits at 11th place in league standings and is hoping the move to a mixed roster, with both English and Korean-speaking players, will help them to break the top ten.

“Today is a sad day, but also a happy day,” Asher said in a video released by the Toronto Defiant. The video shows him happily interacting with fans and teammates. While his time as an Overwatch player is ending, Asher says that this time “is also the start of something new.” The Toronto Defiant’s next game is against the Paris Eternal at 6pm CT on June 7.