Liquid send OG crashing out of the MDL Disneyland® Major

Liquid send OG crashing out of the MDL Disneyland® Major

The penultimate day at MDL Disneyland® came with three separate elimination series and first up to battle for their tournament lives were two TI-winning teams, OG and Team Liquid.

While OG had a terrible series against Team Secret yesterday, they seemed in new vigor today as they opened up with a spectacular victory in the first game. Liquid opted to pick up a Medusa and the early game period was fairly even between the two teams – but as the game continued, OG begun to run away with things as Anathan ‘ana’ Pham’s Troll Warlord ripped through the Liquid lineup. 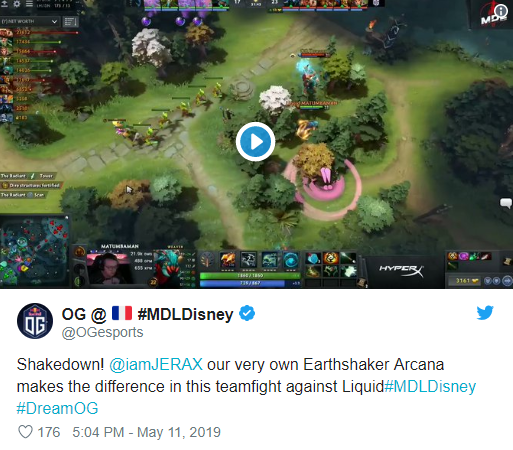 With their first game advantage, OG went into the next looking absolutely brilliant. By 19-minutes, the TI8 winners had already taken down a tier 3 tower in the top lane but even with that, Liquid were keeping themselves in contention. But there was an Amer ‘Miracle’ Al-Barkawi Phantom Assassin that was sitting in wait and when he joined the fights, OG started to fall behind quickly.

With a 20k net worth lead, Miracle decided to pick up a Divine Rapier and carnage ensued as Liquid claimed mega creeps and tied the series. The final game of the series was an amazing showing from Liquid as they dominated from start to finish. There were glimmers of hope from OG but by little over half an hour, they had no hope of coming out ahead and the series was over – with Miracle’s Storm Spirit claiming a double rampage at the close.

With the 2-1 victory for Liquid, they move on in the lower bracket to face either Ninjas in Pyjamas or PSG.LGD. For OG, while their first Major was quite spectacular, it ends with them finishing in an admirable fifth/sixth position.

Next up would be another elimination series as PSG.LGD take on a strong Ninjas in Pyjamas.